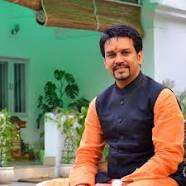 Anurag Singh Thakur is a member of Lok Sabha from Hamirpur in Himachal Pradesh in India . He is the son of Prem Kumar Dhumal , the former Chief Minister of Himachal Pradesh . He is third time MP. Member of 14, 15 and 16th Loksabha.He was first elected to Lok Sabha in May 2008 in a by poll as a candidate of Bharatiya Janata Party . He won once again from Hamirpur representing BJP in 2014 Lok Sabha Elections. He was elected as the President of the Board of Control for Cricket in India in May 2016.On July 29, 2016 he became the first serving BJP Member of Parliament to become a regular commissioned Officer in the Territorial army.