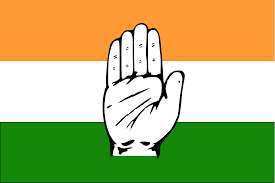 The Indian National Congress (INC, often called Congress) is one of two major political parties in India; the other being the Bharatiya Janata Party.

Congress was founded in 1885 during the British Raj; its founders include Allan Octavian Hume, Dadabhai Naoroji and Dinshaw Wacha. In the late nineteenth and early to mid-twentieth centuries, Congress became a pivotal participant in the Indian independence movement, with over 15 million members and over 70 million participants in its opposition to British colonial rule in India.

After independence in 1947, Congress became India's dominant political party; as of 2015, in the 15 general elections since independence, it has won an outright majority on six occasions and has led the ruling coalition a further four times, heading the central government for 49 years. There have been seven Congress Prime Ministers, the first being Jawaharlal Nehru (1947–64), and the most recent Manmohan Singh (2004–14). The party's social liberal platform is generally considered to be on the centre-left of Indian politics.

From 2004 to 2014, the Congress-led United Progressive Alliance, a coalition of several regional parties, formed the Indian government and was headed by Prime Minister Manmohan Singh. As of March 2017, the party is in power in five states: Punjab, Himachal Pradesh, Karnataka, Meghalaya and Mizoram. In Bihar, it is a part of the ruling coalition. The Congress has previously directly ruled Andhra Pradesh, Tamil Nadu, Gujarat, Madhya Pradesh, Rajasthan, Uttar Pradesh and Goa. In the 2014 general election, the Congress had its poorest post-independence general election performance, winning only 44 seats of the 543-member house.

The Congress' social policy is based upon the Gandhian principle of Sarvodaya—the lifting up of all sections of society—which involves the improvement of the lives of economically underprivileged and socially marginalised people. The party primarily endorses social liberalism—seeking to balance individual liberty and social justice, and secularism—asserting the right to be free from religious rule and teachings.