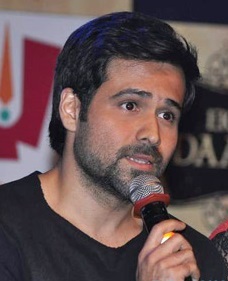 Emraan Anwar Hashmi is an Indian film actor who appears in Hindi films. Through his successful career, Hashmi has received three Filmfare Award nominations and has established himself as one of the most popular and highest-paid actor of Hindi cinema.

His father, Anwar Hashmi, is a bussinessman, who also acted in the 1968 film Baharon Ki Manzil, and his mother, Maherrah Hashmi, was a homemaker. His paternal grandfather, Shauqat Hashmi, migrated to Pakistan after the partition of India, while his grandmother, Meherbano Mohammad Ali, was an actress, who stayed in India. Meherbano Mohammad Ali, later married producer-director Bhagwan Dass Varma, and was the sister of Shirin Mohammad Ali, the mother of producers Mahesh Bhatt and Mukesh Bhatt, who are thus Hashmi's uncles. Hashmi is the cousin of director Mohit Suri, with whom he has collaborated in several films. His other cousins are actresses Pooja Bhatt and Alia Bhatt, while another cousin is actor Rahul Bhatt. Hashmi studied at the Jamnabai Narsee School. After graduating from Jamnabae, he attended Sydenham College in Mumbai. Hashmi later earned a bachelors degree from the University of Mumbai.

Emraan Hashmi, part of the Bhatt family was born and raised in Mumbai. After graduating from the University of Mumbai, he worked as an assistant director for the 2002 horror film Raaz before pursuing a career in acting. The following year, he made his acting debut with a leading role in the crime thriller Footpath, a moderate box-office success.

Prev Page 1 of 4 Next
fresh CATCH