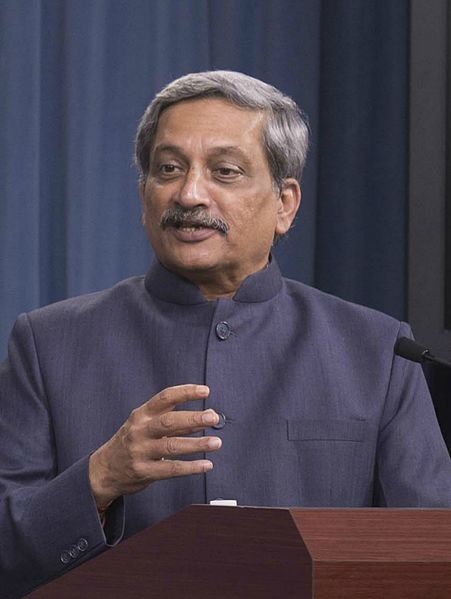 Manohar Gopalkrishna Prabhu Parrikar was born in Mapusa, Goa. He studied at Loyola High School, Margao. He completed his secondary education in Marathi and went on to graduate in metallurgical engineering from the Indian Institute of Technology, Mumbai (IIT Mumbai) in 1978. He is the first IIT graduate to serve as Chief Minister of an Indian state. He was awarded the Distinguished Alumnus Award in 2001 by IIT Mumbai.
Manohar Parrikar joined the Rashtriya Swayamsevak Sangh (RSS) at a young age and became a mukhya shikshak (chief instructor) in the final years of his schooling. After graduating from IIT, he resumed RSS work in Mapusa while maintaining a private business, and became a sanghchalak (local director) at the age of 26. He was active in the RSS's North Goa unit, becoming a key organiser of the Ram Janmabhoomi movement. He was seconded by RSS to the Bharatiya Janata Party (BJP) with the objective of fighting the Maharashtrawadi Gomantak Party. Parrikar has often expressed considerable pride of his RSS background, saying that he learnt "discipline, progressiveness, gender equality, equality of all before the law, nationalism and social responsibility from the RSS". He is sometimes described as having been a pracharak of the RSS.
Parrikar served in the BJP government under Prime Minister Narendra Modi as Minister of Defence of India from 2014 to 2017. He is a member of the Rajya Sabha from Uttar Pradesh.

Prev Page 1 of 11 Next
fresh CATCH