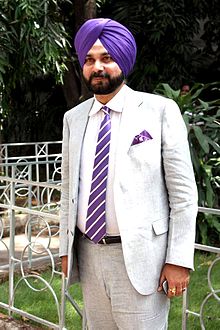 Navjot Singh Sidhu is an Indian politician, television personality and former cricketer. As a professional cricketer, Sidhu had a career spanning over 19 years after his first-class debut in 1981–82. After losing his place in the national team after his international debut in 1983–84, Sidhu returned to score four half-centuries in the 1987 World Cup. Playing mostly as a top-order batsman, Sidhu went on to play in 51 Tests and 131 One Day Internationals for the country. He came to be known for his six-hitting ability and earned the sobriquet 'Sixer Sidhu'. After retirement, he turned to commentary and television, most notably as a judge of comedy shows, and as a permanent guest in Comedy Nights with Kapil (2013–16) and later The Kapil Sharma Show (since 2016).

Sidhu joined the Bharatiya Janata Party in 2004 and contested the general election from Amritsar. He won the election and held the seat till 2014 winning also the next election. He was a nominated to the Rajya Sabha in 2016 from his home State of Punjab before resigning from the position the same year and quitting the party. In 2017, he joined the Indian National Congress in 2017 and was elected to the Punjab Legislative Assembly from Amritsar East.