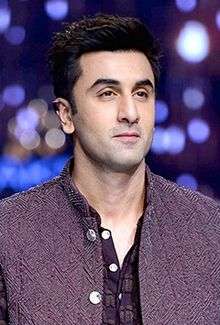 Ranbir Kapoor is an Indian actor and producer. The son of actors Rishi and Neetu, and the grandson of actor-director Raj, Kapoor pursued film-making and method acting at the School of Visual Arts and the Lee Strasberg Theatre and Film Institute, respectively. He subsequently assisted Sanjay Leela Bhansali on the film Black (2005), and made his acting debut with Bhansali's tragic romance Saawariya (2007), a box office flop. Kapoor rose to prominence with his performances in three films of 2009—the coming-of-age film Wake Up Sid, the comedy Ajab Prem Ki Ghazab Kahani, and the drama Rocket Singh: Salesman of the Year.

The 2011 drama Rockstar and the 2012 comedy-drama Barfi! earned Kapoor two consecutive Best Actor awards at Filmfare, and a starring role in the 2013 romantic comedy Yeh Jawaani Hai Deewani—one of the highest-grossing Bollywood films—established him as a leading Bollywood actor. However, he followed it by starring in a series of films that under-performed at the box office, although his performance in the romantic drama Tamasha (2015) was praised. This changed in 2016 when he starred as a musician in the commercially successful romance Ae Dil Hai Mushkil.

Through his career in Bollywood films, Kapoor has become one of the most popular celebrities and one of the highest-paid actors in India. He is the recipient of several awards, including five Filmfare Awards. In addition to acting in films, Kapoor supports charities and causes. He is the co-founder of the production company Picture Shuru Productions, and is a co-owner of the Indian Super League football team Mumbai City FC.

Prev Page 1 of 29 Next
fresh CATCH