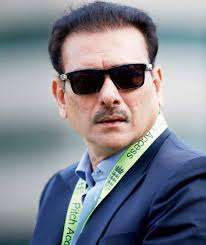 Ravishankar Jayadritha Shastri (born 27 May 1962) is a former Indian cricketer and former Director for the Indian cricket team. He represented the Indian national team in both Test and One-Day matches between 1981 and 1992. Although he started his career as a left arm spin bowler, he later transformed into a batting all-rounder.

As a batsman, he was essentially defensive with his trademark "chapati shot" (a flick off the pads), but he could raise hisstrike rate when required. Due to his above-average height (he stood 6' 3" tall) and an upright stance, he had a limited number of shots against fast bowling, but was able to put the lofted shot to good use against spin bowling. Shastri played either as an opening batsman or in the middle order.