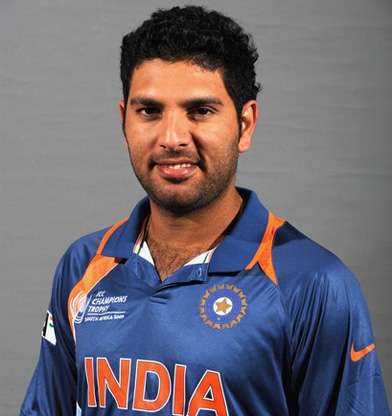 Yuvraj Singh(born 12 December 1981) is an Indian international cricketer , an all-rounder who bats left-handed in the middle order and bowls slow left-arm orthodox . He is the son of former Indian fast bowler and Punjabi actor Yograj Singh . Yuvraj has been a member of the Indian cricket team in ODIs since October 2000 and played his first Test match in October 2003. He was the vice-captain of the Indian ODI team between 2007-2008.

He was the Man of the Tournament in the 2011 ICC Cricket World Cup , and one of the top performers at the 2007 ICC World Twenty20 , both of which India won. In a match against England at the 2007 World Twenty20, he famously hit six sixes in one over bowled by Stuart Broad - a feat performed only three times previously in any form of senior cricket, and never in an international match between two Test cricket teams. He holds the record for the fastest fifty in Twenty20 Internationals and in all Twenty20 matches, scoring 50 runs in 12 balls against England in 2007.